I was talked into racing this sprint triathlon in Chester by my friend Jess. Little did I know she had decided not to race and instead planned a wild night out the night before for us. When will I learn that racing with a hangover is not a good idea!!! We arrived at race venue ‘The Meadows’ the next morning at 7:15am.  There was a great buzz around the place, the atmosphere was fab! There were 350 women racing, from all different backgrounds and all different abilities. I spent most of the morning in the portaloos (nice!) but tried to ‘talk myself into it’ and kick some ass. 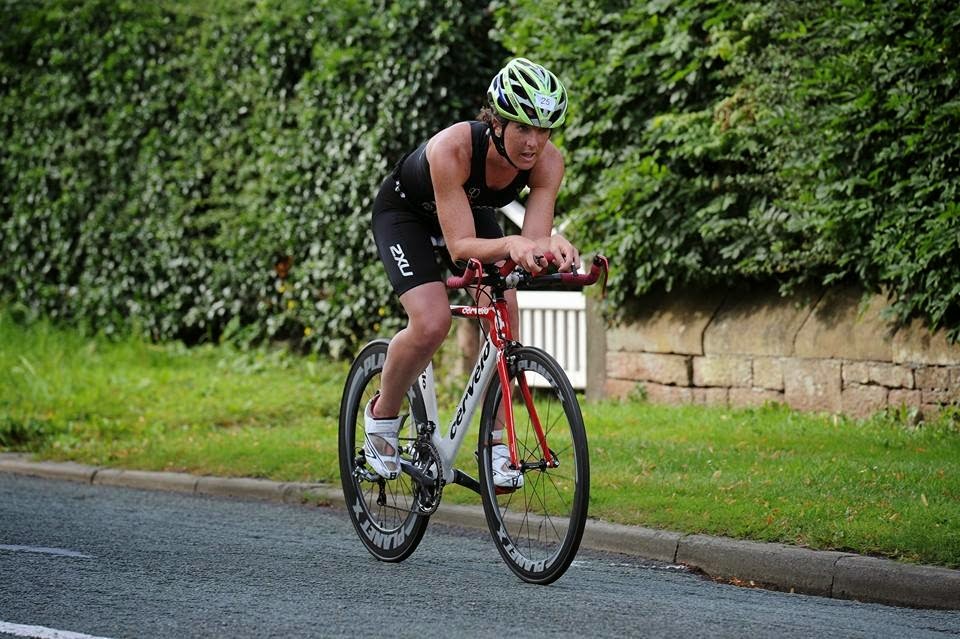 The swim was in the River Dee and was a lovely calm swim starting at one point, and swimming up (or down?) stream to the next. I led for the first half of the swim until someone swam past me and I latched onto her feet. We went slightly wrong at the end, almost forgetting to go through the ‘gate’ before exiting the water. Out of the water in 2nd and Jess gave me the biggest cheer ever! A quick T1 saw me out on the bike first with about 4 other girls in close pursuit, grabbing their bikes and following me. 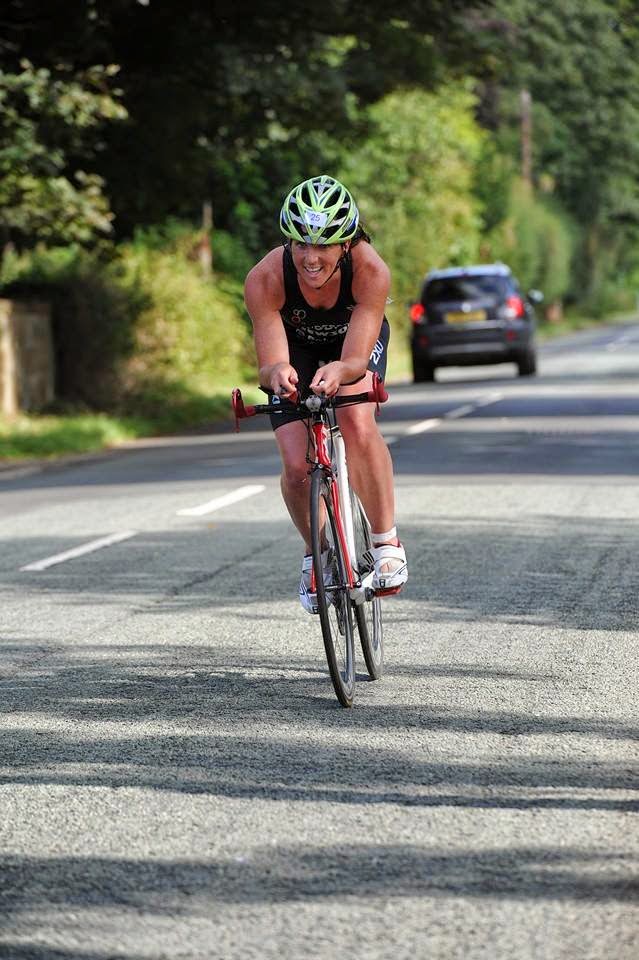 Being the first athlete out on the bike course meant the crowd were going wild! They were screaming and shouting and applauding as if I were a celebrity! I loved soaking up the atmosphere and for the first time all morning, felt alright! If bike courses were made for me, then this would be it. Mostly flat, a few drags and rolls on an out and back course. By the time I got to the turn around point, I already had a huge lead. The headwind on the way out had played to my strengths but coming back in with a tail wind it would be harder to make more time on my competitors. I got a little held up on the way back; mostly because all of the other girls from later waves were still heading out on the bike course so when the roads got narrow, the cars infront of me stopped to let them through safely, but in the process meant I was sitting in their traffic jam! That happened a couple of times which was a little frustrating. Coming to the end of the bike course I was navigating the last few roads around the estate back to transition when 2 marshals sent me back out again with the other athletes. I don’t think they realised I was the first girl back. Most athletes would use their common sense and just carry on but me being me, meant that I turned round to start the bike course again until they started calling me back! Haha what an idiot! 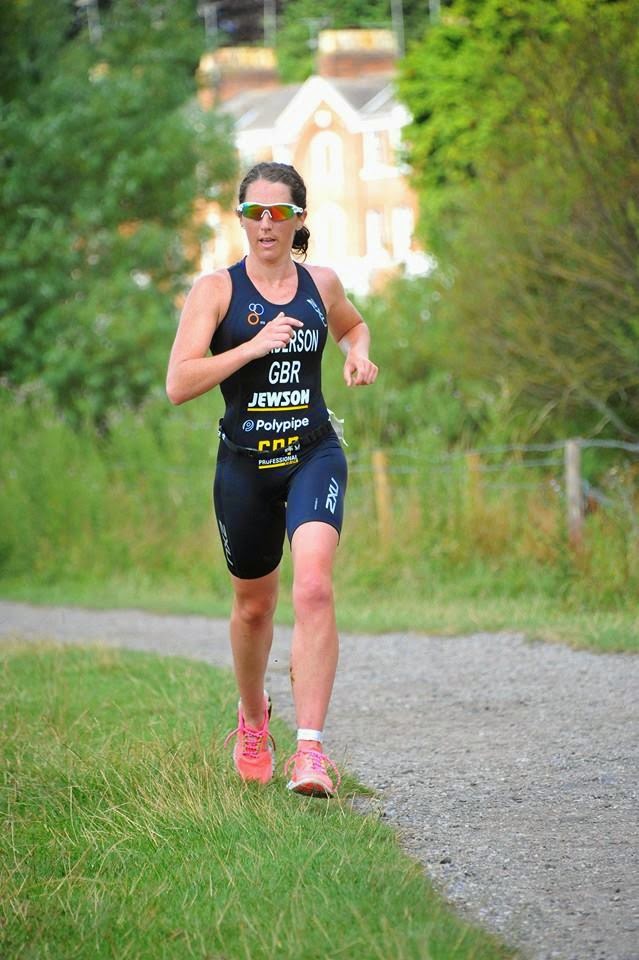 Back into T2 and Jess was going wild again! The commentator announced that last year I had won the British and European Championships (I felt a bit embarrassed by this) and he also told the crowds how I was fuelled for today’s race by prosecco and cava, cringe!!! Off on the run and this is where I felt really bad. I could just taste alcohol. So gross! I had been running for about 3 minutes when I heard the commentator announce the next girl into T2. Ah great, I thought, I have a nice big lead I can just plod round and try to feel human. However Dee Allen of TeamFreeSpeed had other ideas. She was a gazelle! I have raced with super speedsters like Emma Pallant and Katie Hewison in the past and I swear Dee would give them a run for their money! On lap 1 the marshalls were saying “I think it’s safe to say you’re going to win this one love!” but by lap 2 it had changed to a frantic “you better get a move on!” I tried to pick it up a bit with 2k to go and a little bit of sick came up so I decided to go back to plodding. It will be alright, I thought. Then Jess was legging it towards me shouting to get a move on, (Is it bad if I admit that I wanted to punch her in the face!) Haha! I was just hating every second and replied to Jess that I didn’t mind if I didn’t win. 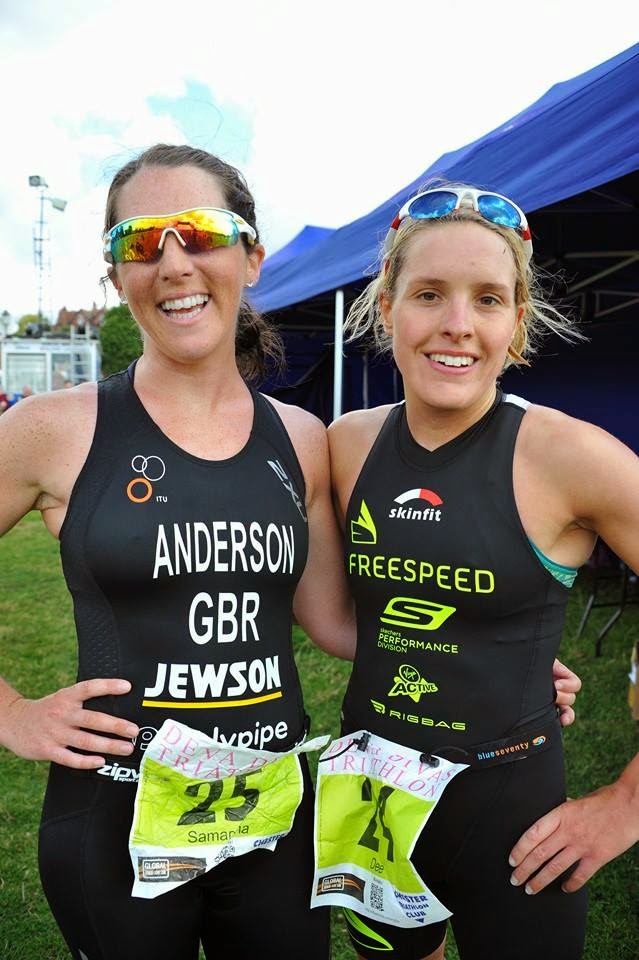 But once I said that I looked over my shoulder and could see Dee was catching me quickly! I thought to myself how annoyed would I be if I didn’t win because I was hungover? The answer? Very! So with 1km to go I picked it up a notch and ignored all feelings of sickness! Once I came out by the car park and could see the finish, I knew Dee wouldn’t catch me so could relax into the finish, crossing the line in 1:18:07, just 5 seconds ahead of Dee (she ran a sub 17 minute 5k!!!)! What a great race!! It was quite exciting having Dee push me all the way (although I didn’t feel like that at the time!) What a great race!