So how is Blenheim Elite different to the usual  races I’ve done?
Well firstly, it’s fast! Incredibly fast! There is no letting up here, these girls mean business!
Secondly, the elite race is free. And everyone loves a freebie!
Thirdly, there’s prize money….although see point one about having to be really fast!
And finally, it’s a drafting event, meaning after the 750m swim you are allowed to tuck in on the bike for 20km before the run section.
Now point 4 would be great if you could tuck into a pack of good cyclists as they go much faster than solo riders. But to make that pack you have to be out the swim faster than a mermaid (back to point one!) and if you miss the main pack after the swim, you’re race is pretty much over. So with this in mind…..the goal (and the only goal!) was don’t mess up on the swim!
So into the water (a lovely 18 degrees), and off we go and I actually (unlike Liverpool elite last year!) held my own! It hurt! It was fast! But I was roughly keeping up in the mix. Out of the water in a huge PB of 10:54.  A good start! 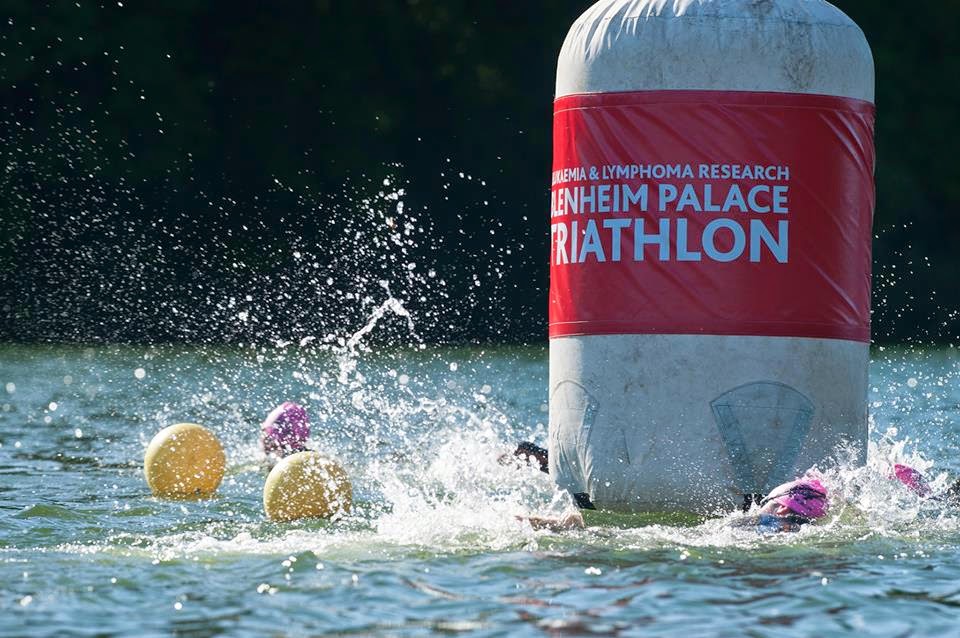 Except Blenheim has a testing 600m run uphill from the lake into T1. At this point Natalie Seymour, Eloise Du Luart & Suzie Richards all overtook me (if you have seen them run, you will now why!).  I initially thought I could make a good cycle pack with them but this soon turned to bitter disappointment when I came into T1 about 10 seconds behind them and watched them all form a group in the distance.  I jumped on my bike but it was too late. They were gone. And because they are super talented and would no doubt work hard in a group, that 10 second deficit turned into around a 4 minute deficit by the end of the bike!

So instead my bike was mostly solo for the first lap, picking off a few other solo riders, going over the T1 run in my head thinking “I was right there!!” and “How did I miss that group?” and “It wasn’t even my swim that let me down!”  In between these thoughts I joined a small group of 3 and recruited a few others along the way – with every person we caught they jumped on the back.  Unfortunately the group wasn’t very effective at all so it was more like being out for a Sunday jolly.  Looking back I was not tactically smart at all, I towed a lot of people round and let impatience get the better of me, but I learnt so much and got to experience the importance of decision making (or lack of!) in drafting racing. 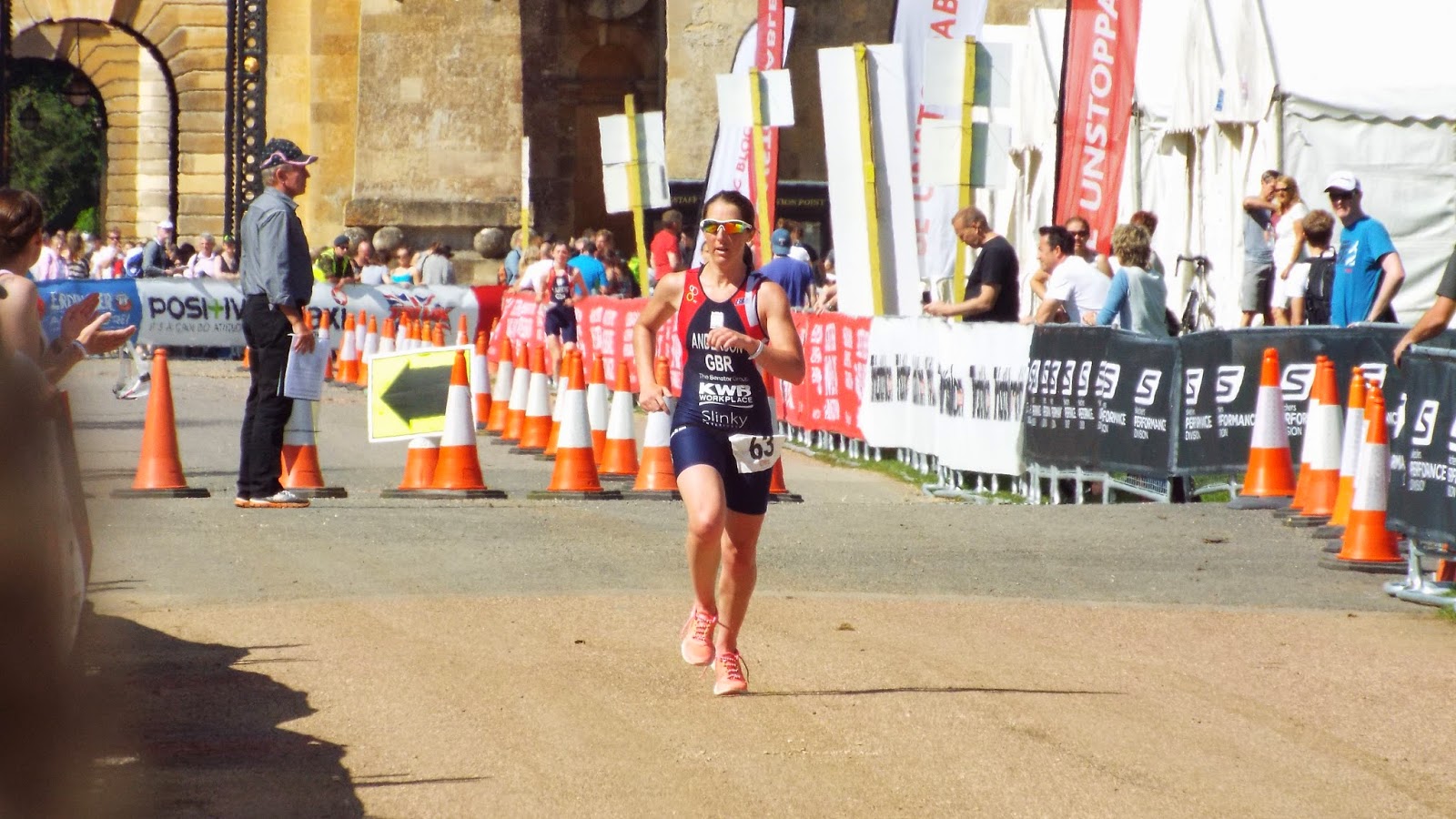 The run was undulating and tough but in a stunning setting.  Having the palace as a backdrop was amazing!  I eventually crossed the line in a disappointing place of 25th senior elite lady, miles behind the girls I wanted to be racing with, but with bucket loads of positives and memories to take away.

I had a mix of emotions after the race:
1. Relief! Thank god it was over! That run was painful!
2. Euphoria! I was killing myself laughing with Hannah and Suzie shortly after the race and completely forgot all about the pain and decided this was the best day ever!
3. Disappointment! Once the results were listed I wanted to rub them all out and start again.  I was frustrated to not show what I can really do.

4. Determination! Once I got home and went for a quick spin on my bike I started to think about how I could use this experience to better myself as a person, and an athlete, and try to bounce back faster for the next one. 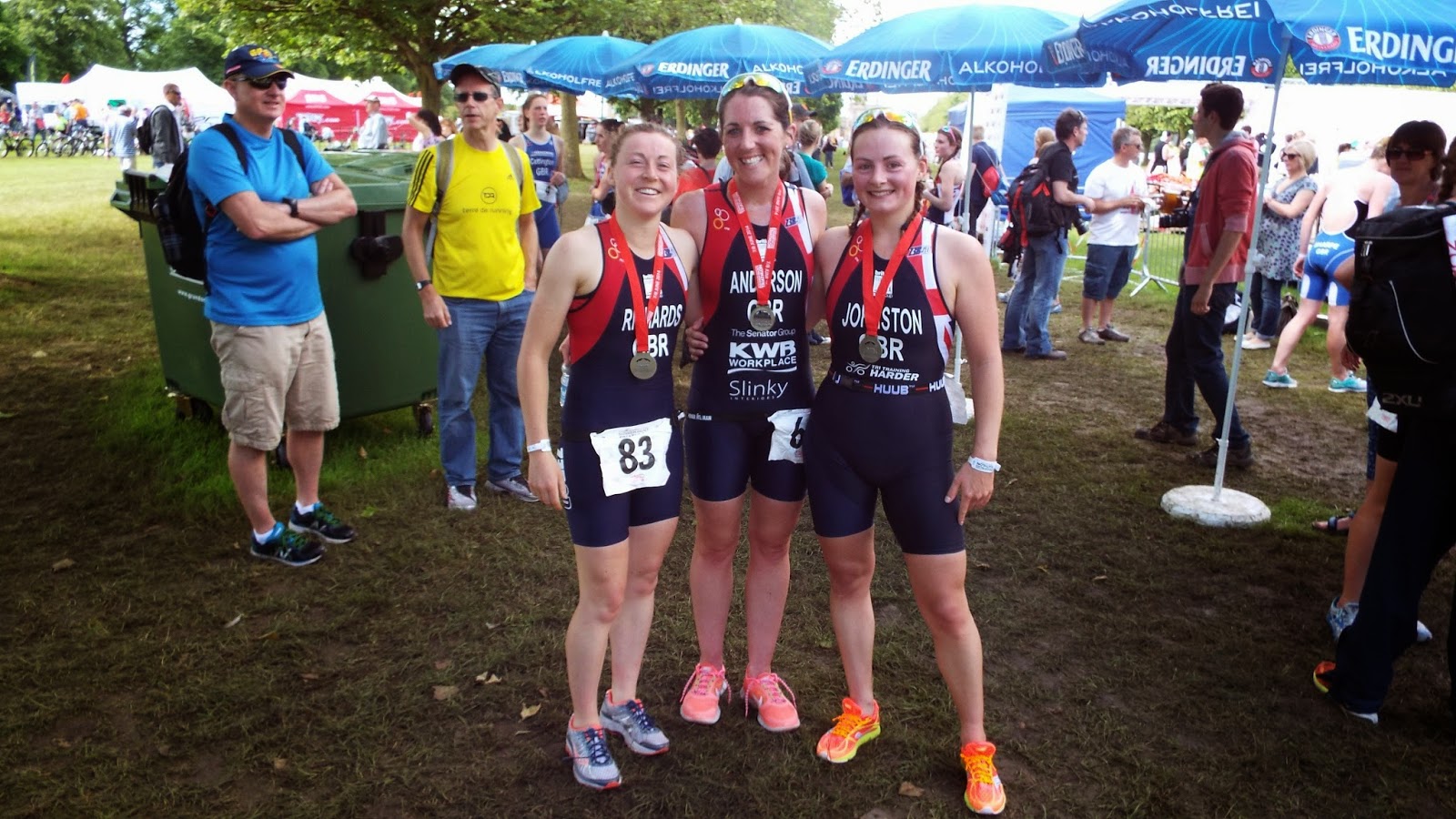 So, for me, the best bit of racing is catching up with friends afterwards and it was so nice to see everyone! When I told Chris I was off to get my bike out of transition he knew that would mean an hour of chatting en route to everyone! It was so nice to speak to the girls and I chatted to Kim about her future travels to Kitzbuhel, Kirsty about her wetsuit dilemma, Katie about her massive successes in the French Grand Prix, Hannah about her mad swim dance, Lou about her Pontevedra tip, Natalie & Elo about their Elite debuts, Leanne about her Xterra races and then had a lovely picnic with Chris, Suzie and Suzie’s family (thank you for the food!).  I’d like to say a massive well done to all the girls; win, lose or drawer it’s the sportsmanship and fast, fair and fun racing that makes it so worthwhile.

So my final thoughts: I am not an elite triathlete (despite friends at work asking if I am going to race in Rio 2016!!) and so I am extremely grateful to the organisers at Blenheim Triathlon for giving me this experience, it was amazing and I’d love to come back next year! Not all races go how you want them to, but bad races don’t define you….they strengthen you. So now it’s time for me to practice getting my wetsuit off without removing my timing chip before the next race!