After missing the British Triathlon Champs two weeks ago I was so happy to feel well enough to go and race in this event in Cologne, Germany.  Although May has pretty much been a write-off in terms of training, and I had started to feel pretty down as there’s only so long you can keep your spirits up for, I was actually really excited to enjoy some girlie time away with Mum and enjoy the city break.  (I have since discovered the cause of my illness……I am allergic to chlorine! It’s so bizarre it’s funny! I am actually allergic to training! Not the best news for swim training but so happy to have an answer!)

Cologne is Germany’s fourth-largest city after Berlin, Hamburg and Munich (who said this blog wasn’t educational?) and is an absolutely beautiful place. It was to host the European Aquathlon event, the first one of it’s kind (I think?!) consisting of a 1k swim/5k run. I have not done an aquathlon since 2011 and even that was just a 400m pool swim/3k run so this was something different.  Unfortunately it clashed with the World Duathlon Championships in Pontevedra which I really wanted to do but I knew a duathlon would take too much out of me given my current health so going to Cologne was a chance to race in a country I have never raced in (thus another flag for my nomination bracelet!) and without the faff of packing the bike away it was easy, simple and cheap as chips!

Mum and I travelled with Anna and her Mum on the Thursday and spent the afternoon exploring the sights. We somehow ended up in the Chocolate museum chatting to some rather cool Americans who were visiting from South Carolina.  They asked what brought us to Cologne and when I said “We are here to race in the European Aquathlon” they burst out laughing and said “YOU?!?” Errr…Yes me!! Then they did the whole back-tracking thing and bought our drinks for us (I think they felt bad!)

On the Friday we got the open top bus around the town and visited the city’s famous cathedral.  Our race was a leisurely 3pm start on the Saturday which gave us a chance to watch the elite’s who were off at 2pm. With the course being in a sort of dock, and the run being two out and backs along the river Rhine, it was great for spectating and fab fun to cheer on my friend Emma who had a cracking race and also Hannah who sprinted her socks off at the end of the run to just miss out on Gold. Super inspiring performances.

Thanks to my new approach to races I wasn’t nervous at all and just looking forward to getting stuck in. I didn’t realise quite how ‘stuck in’ until the start of the swim when I had someone swimming over me for a good 300m. It was relentless and as I had someone on my other side there was nowhere I could really go.  Eventually she moved away but it took me that long to recover from it that by the time I got to the half way turn around point I realised I hadn’t thought about anything to do with my stroke and was swimming with some old bad habits.  The 500m return stretch was much better in terms of having clear water to swim in but I was all by myself analysing the huge  gap that had developed between me and the next swimmer in front and I knew it would be a tall order to make that up!

I exited the swim in about 14th place overall in 15 and a half minutes which was about a minute slower than what I expected/wanted. Getting up out of the river was a laugh in itself and I decided to go for the Damsel in Distress act, throwing both arms in the air at the same time, being hauled out by the German Hunks. Great, I’m out. Up some steep steps and I’m into transition with my lovely friend Helen Russell (deja vu from Turkey) and just as I’m about to put my trainers on my timing chip rips off my ankle and flies across transition. A quick dash across transition to retrieve it and I’m off on the run.

I tucked in just behind Helen for the first part of the run not knowing how I would feel thanks to illness etc. She pulled away from me a little but if there’s one thing I have been able to train this month….it’s my mind….and I used my tips from Chris Janzen at Triathlete Mind to refocus.  The nature of the course meant I could see the race unfold infront of me.  Natalie Thomas was having a storming race and had a clear lead.  Charlotte was about a minute up on me and at the turn around point I could see Kerry in fourth about three quarters of a minute down. It was close! I felt strong and both Kerry and I were running around 19 and a half minute 5k pace, slowly closing Charlotte down but the gap was too big to close. On the start of the second lap I overtook Helen and gave her a shout of encouragement and although I knew I couldn’t catch Charlotte I wanted to give it my all.

Crossing the line was amazing, it was fab to be back racing! I had finished 3rd in my Age Group, 5th overall with a solid-ish swim and a great run (which in fact turned out to be half a km long). Not long after, Anna crossed the line with a huge smile on her face to take the silver medal in her Age Group and Mum and I cheered her across the finish line.  We celebrated afterwards with photos and Erdinger Beer.

When it came to the prize presentation, my name was not called out and instead the bronze medal was presented to Kerry who had come fourth.  I’m not normally a drama queen but I was so upset I felt my eyes welling up. I couldn’t understand why I was not being presented with the medal that I had raced so hard for?  I tried to explain to the organiser that I had come third and he asked what my race number was. I told him I was number 119 to which he replied “you did not race!” I most definitely had raced but it turned out my timing chip hadn’t worked.  I then tried to explain to the girls who were giving the medals out that I had come third but they probably didn’t want to cause a scene as everyone was applauding and cheering. Kerry could see my protests and was really gracious in presenting the medal to me as it was an honest mistake and she gave me a big hug which helped calmed me down a little!

Afterwards Helen, who speaks fluent German, managed to explain to the organisers that I did race and could vouch for where I came in the race, as could the other competitors,  so to make things easier they gave me the same time as Helen minus two seconds, which although not 100% accurate, suits me absolutely fine, and I was so grateful to Helen for her help as she went to so much trouble to help me! Thank you!

So with a certificate and medal in hand it was time to celebrate with the other GB athletes. We hit the town and in true scouse style, hit McDonalds in the early hours of the morning!  On the last few days we enjoyed a boat trip down the River Rhine, shopping in some German Markets and I found a love for running again getting in some relaxed jogs before it was time to go home.

I’d like to say a massive well done to everyone who competed. It was a great event and although it was a much smaller scale than usual, the quality of athletes was still high – so high in fact that anyone in my Age Group could have competed with the elites and not come last! Massive congrats to Natalie & Charlotte who took the Gold and Silver in my race and also to Kerry who pushed me every step of the way, you will be on that podium next time! Huge well done to Anna and Helen (and thank you for your help!), to Mary for being lovely company and cheering me on, Dermot & Bill for getting me on the start line (your patience with me is much appreciated!) and finally, Chris and Mum who are just the best!

So next on the list for me is Blenheim Elite on Sunday. I am totally there to make up the numbers but if you fancy seeing someone coming last and enjoying every moment of it, then come and support me on Sunday at 8:55am! 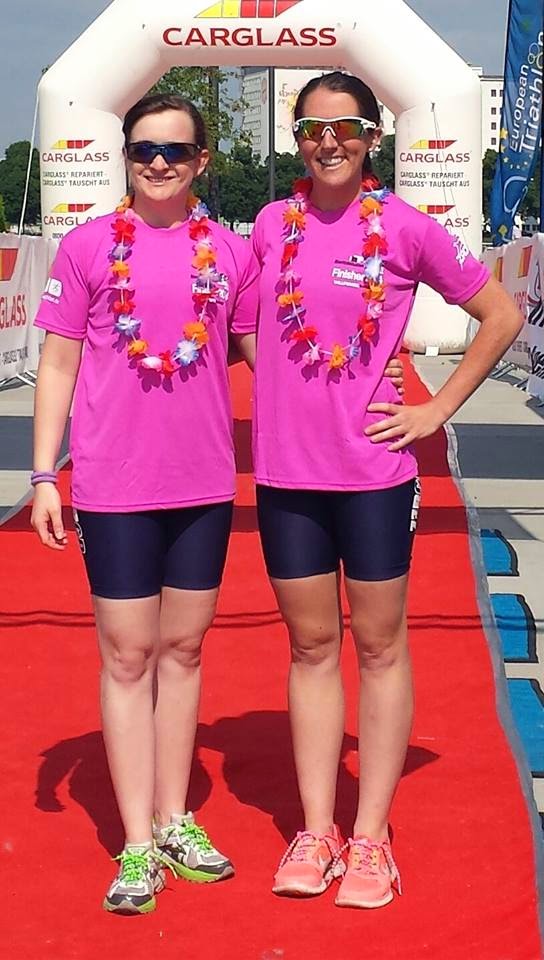