What a day!!! I don’t really know where to start with this blog post.  I never in a million years thought that I would be a British  Age Group Champion! It hasn’t quite sunk in! I have been fortunate enough to win all my tri races in the UK this year but this one without a shadow of a doubt tops them all.  I think it means even more after the real disappointment in Holland in April; sport has its highs and lows and this was definitely a high!

I have only ever competed in one British Championships before and that was back in 2010.  I recorded a swim time of 14:30 (at least 4 minutes of the lead girls although I was overjoyed with it at the time) and then punctured on the bike and sat on the side of the road and cried (before a random nice man in a red van gave me a lift back to the start – I thought he was a marshal but apparently not as I had to direct him to transition!).  So my aim of the day was to improve on 2010 (not difficult), try really hard to be in the top 7 to get a Qualification Place for the Worlds in London and (if I’m really lucky) get on the podium. I knew this would be a tall order as the quality of the athletes was amazing!

The day started bright and early. Mum, Chris and I arrived in plenty of time.  We bumped into lots of friends including Michelle and Kathryn en route to the registration tent, I think Mum was worried I was going to exhaust all my energy chatting so much before the start but I find it a welcome distraction to race nerves! And it’s always nice having a good natter! With the race not starting until 2:15pm it was difficult to know what to eat (especially with my ongoing stomach issues) and we got so involved in watching the earlier races that I almost forgot why I was there! We set up base with my friends Anna & Emily and tried to get all our pre-race excuses in before the start!  Emily was definitely strong enough to be on the podium in her Age Group so she was also hoping for a strong race.  Unfortunately Anna has been struggling with injuries so was only planning on doing the swim and bike but is going to smash it in a few weeks time at the later qualifiers.

We eventually racked our bikes and set up (transition was interestingly split in 2 places) before walking nervously to the swim start.  I got in really early to have a warm up and I am delighted to say that my new goggles (never tried and tested before) were ace….I could actually see! (Thank you to the marshal who stood on the side with my spare goggles just in case! VIP treatment or what!) They seemed to hold us on the start line for ages with everyone trying to creep forward and eventually we were off….and omg was it brutal!!! I think girls can be just as vicious as men! I found a pair of feet to draft off and any time another girl tried to dunk me or force me in an another direction I fought for my spot.  An ongoing left shoulder injury was playing up but nevertheless I was over the moon with an 11:44 PB and to be out with roughly the main pack of girls. 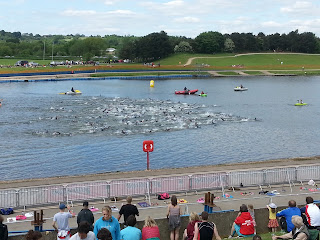 I seemed to draw the short straw in transition as I was literally on top of my bike 2 steps out of coming out of the water so I hadn’t even started getting my wetsuit off.  I could hear all my friends and Mum & Chris cheering for me and I was relieved to have had a good start to the race.  The bike course was fantastic and suited me to a tea being a power rider.  I had a fab first 2 laps overtaking lots of people and then (like in previous races) seemed to take my foot off the gas.  I really don’t know why I do this, it’s not really complacency – more distraction by things like the geese and the supporters and “ooh…isn’t that nice over there”.  I really must, must work on this as I’m not making the most of my strengths.  Timetrialling would suggest that I could have done a 30 minute split but instead I clocked 31:21.  The bike was pretty uneventful apart from 2 hairy moments. The first was when one girl was overtaking another but it reminded me of when lorries overtake other lorries (i.e. at the same pace) and when they didn’t respond to my “yoohoo, coming through” call I breathed in and squeezed by them (not that breathing in would make any difference!).  The second was when an ambulance drove around the lake to park itself up by a whole load of geese and ducks to clear them off the course, except it seemed to stop right in front of me so I had to unclip and scoot round which wasn’t ideal but I loved the course and was relatively pleased with my time. 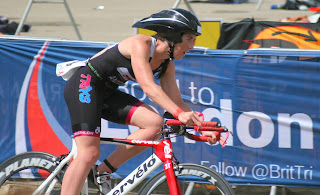 Then for the worst dismount of the day! I can’t even bring myself to write about it. It was so embarrassing I had to laugh at myself. I got my feet out of my shoes but in my excitement forgot what I was doing and before I knew it my bike shoes were dragging along the floor, I literally came to a holt 100m before the dismount line.  I cut my losses and decided to jump off and run the distance but it was rather funny!

By this point I was leading my Age Group, although I didn’t know it.  I ran out of T2 in pursuit of the others and caught someone within a kilometer but then really began to struggle.  I had a stitch (which is pretty standard for me) but it was accompanied with some other rather painful stomach cramps and whilst my legs and breathing felt absolutely fine, my stomach didn’t want to play ball.  I visibly slowed at this point and couldn’t help but look behind to see how much leeway I had.  The run seemed to go on for an age and I was much weaker than in previous weeks but I was determined to not lose any places and when I realised a girl behind was catching me (I later realised it was Becky Schofield of Tri Anglia) I knew I had a sprint finish in my legs….but I really didn’t want to use it! 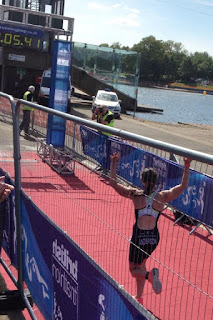 When I approached the finish line the commentator announced that I was the 25-29 Winner (cue throwing my arms up in the air in disbelief!).  I couldn’t believe it.  I knew I was up there, but you never really know.  I felt so emotional crossing the line; there have been big championships before where I thought I could do well but have never delivered on the day.  It also gives me hope knowing that I have more to give on the bike and run but for once I am not going to think about splits and instead be thankful for what I’ve achieved.  I also won biggest smile of the day, I think this photo says it all: 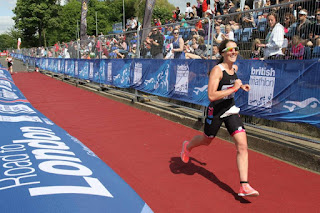