When the gun went off, the speed of some of the men was ridiculous! I’ve never seen people charge off so fast! I was conscious not to get too caught up in the fast pace too early on so settled into my own rhythm.  Although I was settled in about 25th place overall I was aware that I was the first woman which in one respect is a good thing, but in another you almost feel like a sitting duck waiting to be caught!  The course was only 4.5k but nevertheless I was really pleased with my time of 16:43 and felt strong. 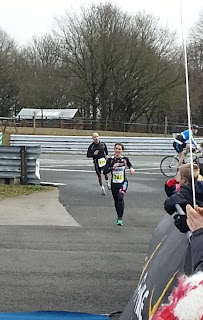 Onto the bike and it was time to execute goal 3.  Chris had told me that just because I feel good and feel like I am going fast, doesn’t mean everyone else isn’t feeling good and going fast so I tried to concentrate a bit more this week and replicate a bit better that feeling of Time Trialling.  It was really windy in parts, much tougher conditions than last year.  My front wheel kept catching the wind at times and I felt a bit blown about but dug in and tried to stay powerful.  The laps seemed to go really quickly and I was pleased with my bike leg of 35:40 which was almost 3 minutes quicker than the next fastest bike. 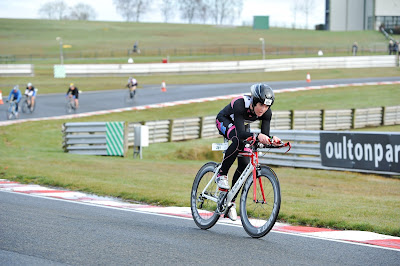 I didn’t feel quite so fresh on my second run as I did at Althorp; maybe a sign that I had pushed harder on the bike?  I quickly closed down 2 guys that started about 100m ahead of me, they seemed to speed up when I caught them but that was nice to run in a group of 3, each one of us trying to drop the other.  I knew I had a big lead but wanted to keep pushing to the line, like you would in any other race.  The climb on the last bend seemed to massively increase in gradient on the second run and my legs did feel pretty sapped of energy so I was chuffed to run the second run in 16:55, only 12 seconds slower than my first.

Winning the race by nearly 5 minutes was a massive bonus.  I had achieved everything I had set out to do and had thoroughly enjoyed the day.  Caroline was not far behind in 4th place which is a great start to her 2013 season especially as she has been plagued with injury this winter. Well done Caz!!!

We stayed to watch the standard distance event afterward with some great performances from the girls (Sam, Flic, Christine, Kate).  Phil finished 11th which considering he only took up running at the end of last year was fantastic! Thanks to Extra Mile Events for a fantastic race and for the Timex that I won (what a great prize!!!) – you can enter their events here, also to Event Photos for my free high resolution pic (check out their great pics here) and to all the other spectators, supporters and marshalls.  I even celebrated with a glass of prosseco!

What’s next? Well after spending the last few days in hospital on a drip, first and foremost is rest and recovery!  I may even have some time for none related triathlon things (there are actually quite a lot of hours in the day when you’re not training!) Its 4 weeks to Holland so I’ll just have to see what I can do between now and then but at least we have booked into Centre Parcs in Holland so if the race is a disaster or my fitness has deserted me we can make the most of the splash pool and slides!